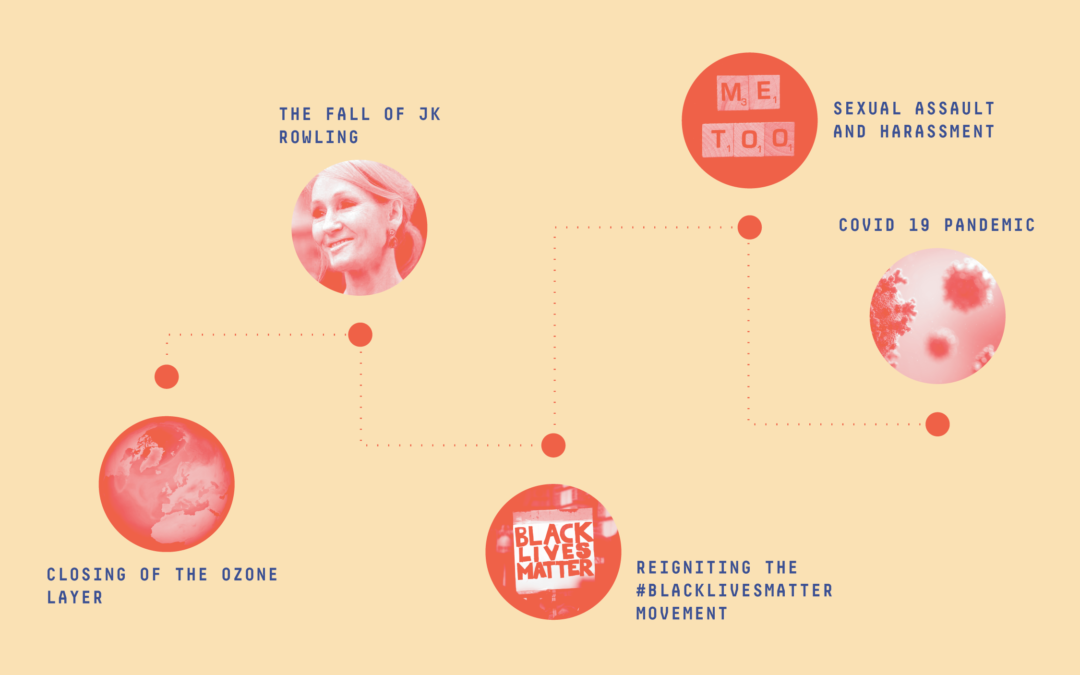 If you follow one or two news sites on social media, you’re probably thinking the same thing we all are: How the heck is it only July? From geopolitics to natural calamities to pop culture, 2020 is full of events that have globally made huge impacts on our lives.

TRIGGER WARNING: The article below contains mentions of certain acts that may be distressing to some readers. Please be advised.

Closing of the Ozone Layer

What was supposed to be the largest ozone layer hole in the Arctic suddenly healed. In April 2020, the unexpectedly formed hole closed as announced by the Copernicus Atmospheric Monitoring Service (CAMS). While many attributed this to the rise of COVID-19, scientists concluded that it was due to the end of an intense polar vortex that allowed ozone air to enter and close up the spot.

George Floyd and the #BlackLivesMatter Movement

On May 25, 2020, George Floyd was arrested prior to his death on the streets of Minneapolis, USA. Released footage on social media showcases a caucasian police officer, Derek Chauvin, pressing his knee down to the neck of Floyd despite the latter’s pleas that include “I can’t breathe”. The video itself spread all over Twitter and Facebook, bringing back focus to the #BlackLivesMatter movement alongside other initiatives such as #BlackOutTuesday.

The Fall of J.K. Rowling

From transgender rights to racial representation, JK Rowling’s prestige and reputation further diminished in mid-2020. This all particularly started due to her comments on transgender people, that were said to follow Trans-Exclusionary Radical Feminism (TERF). In December 2019, she supported Maya Forstarter when the latter lost her job because she expressed intolerance towards transgender people. She proceeded to post similar sentiments on Twitter this June 2020. The discussion on how problematic she is shed light on other flaws of her literary empire, some including the tokenism of Asians in the Harry Potter series.

The Rise of Stories on Sexual Assault and Harassment

Post-#HijaAko, several reports have been raised on social media calling out certain individuals for acts ranging from sexual misconduct to misuse of data. Some include Francis Mariano, the CEO of Cookies by the Bucket, for sharing information of the influencers who promote his business against their consent. Another being the multiple stories of abuse of authority from members faculty coming from the hashtag #MCHSDoBetter. Lastly, there’s Boo Gabunada, who portrayed the friend of a rape survivor in Ang Huling El Bimbo: the Musical, for sexually assaulting his own girlfriend.

After being classified as a pandemic in March 2020, COVID-19 is the globally-recognized cautionary tale of inaction. Due to highly contagious nature, businesses and other establishments have closed down — sending masses of people into financial distress. On top of the over 400,000 deaths as of June 2020, there have also been several issues with tracking the data of death tolls and confirmed cases in countries like Brazil and Philippines. Several groups have helped in supporting the different people affected by this pandemic. Some aim to minimize the effect on the poor, some aim to support frontliners and healthcare providers.

Even if these events get you down, we can only uplift each other and ensure that our institutions are catering to the needs of those who they are expected to serve: us. Provide love and support to anyone who comes out to you about their stories of assault, continue to sign petitions against unjust policies, and give aid to the frontliners who risk their lives with little to nothing in return. If what you’re seeing on your news feed is affecting your mental health, do not forget to take breaks from social media and seek help or someone to talk to.