Feel the Pride While in Quarantine With Together, Wherever 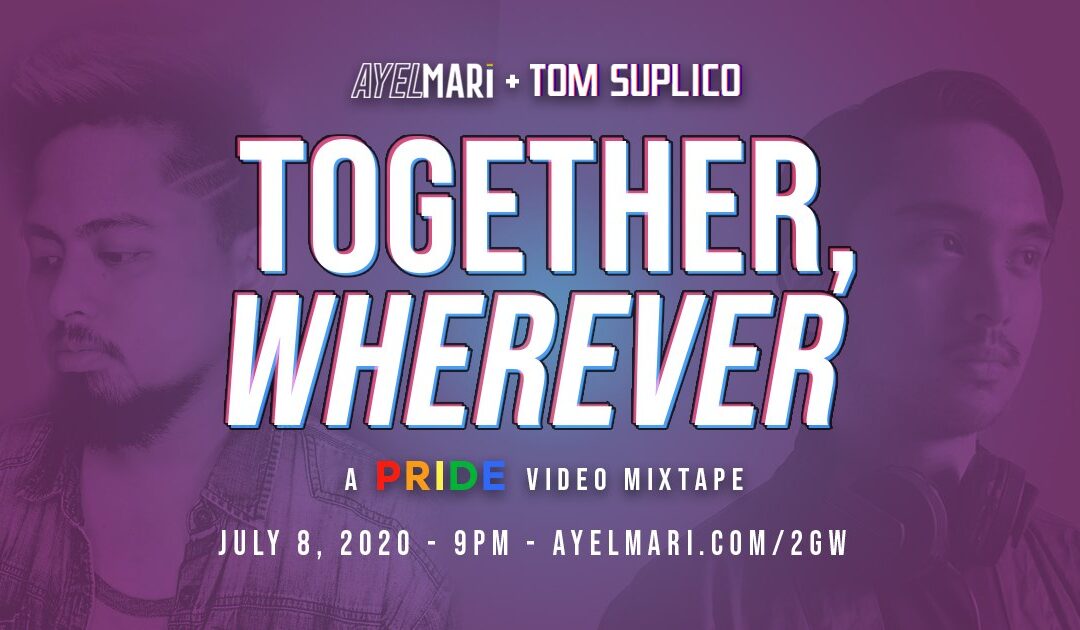 Whether rain or shine or in a pandemic, nothing can stop the LGBTQIA+ community from showing their pride. The rise of COVID-19 has come with the cancellation of Metro Manila Pride and similar gatherings, but it’s also welcomed a whole new world of creativity and art for many of the movement’s members.

About a month ago, DJs Ayel Mari and Tom Suplico brought together the different faces of the community to create Together, Wherever, a Pride Video Mixtape (as dubbed by the former) that celebrates the Filipino LGBTQIA+ artists, dancers, drag queens, friends, and allies.

When asked about their inspiration for the video mixtape, both of them state that the community itself guides them through picking every element — from the visuals to the set. According to Tom Suplico, the songs one can find in the mixtape are a compilation of what they thought was the musical background of the community’s past and present experiences.

Ayel Mari mentions Mark Ronson’s fun, vibrant, and colorful mixtape Love, Lockdown as inspiration for the piece’s general vibe. He wanted to create a passion project that married his love for DJing, street dance, the underground scene, performing, and video-making.

The collaboration wasn’t easy. For starters, this is Ayel Mari’s biggest collaboration to date. With the no-contact nature of COVID-19, he says, “It was pretty challenging to find the right people who we thought would be suited for the songs that we curated. Add into the mix messaging people, pitching to them the idea, waiting for their responses, and following up on the progress of their video recordings.”

He adds, “Not everyone was on board–some people never responded or just left me on read, while some said that they were game but never followed up.” On Tom Suplico’s end, making the mix was the hardest part because of how unplanned it was. He says, “It was challenging and exciting in this sense because we didn’t align before mixing what we wanted the overall output to sound like, so we really didn’t know how it would go until it was done!”

COVID-19 has affected our lives, so it’s definitely affecting the LGBTQIA+ community as well. Tom Suplico recognizes that many of those who are in the closet have to go through the pain and dread that comes with staying with people who don’t accept them. Both he and Ayel Mari made Together, Wherever in the hopes of giving these people the same love and support that goes beyond being physically together. He mentions in one of his few words for the interview, “For our fellow community members, we hope that [the video mixtape] brought you back to a fun night out with your friends, the dancing, and the moments of awe when you see the performances and art our community has produced.”

Beyond the members of the LGBTQIA+ community, the video mixtape opens its arms to more allies. Both Tom Suplico and Ayel Mari agree that the piece aims to remind people that there’s more to the community than the stereotypes that are passed around in the media. In between achieving success and pursuing passion, to many people the community is their lifeline in an intolerant world.

In a call to action, their last few statements allude to a popular chant used in Metro Manila Pride that says, “Ang Pride, and Pride, ang Pride ay protesta!” But they state that pride is not just a once-in-a-year fight for equality. Rather, it is a continuous fight that will adapt as the community continues to advance in and challenge this changing world.

Together, Wherever will stream on Wednesday, July 8 at 9PM PST. Visit www.ayelmari.com/2gw to watch this wonderful piece. You can also check out more of their work here (Ayel Mari) and here (Tom Suplico). For the video mixtape’s teaser, click here.