The Rise of Without Context Groups 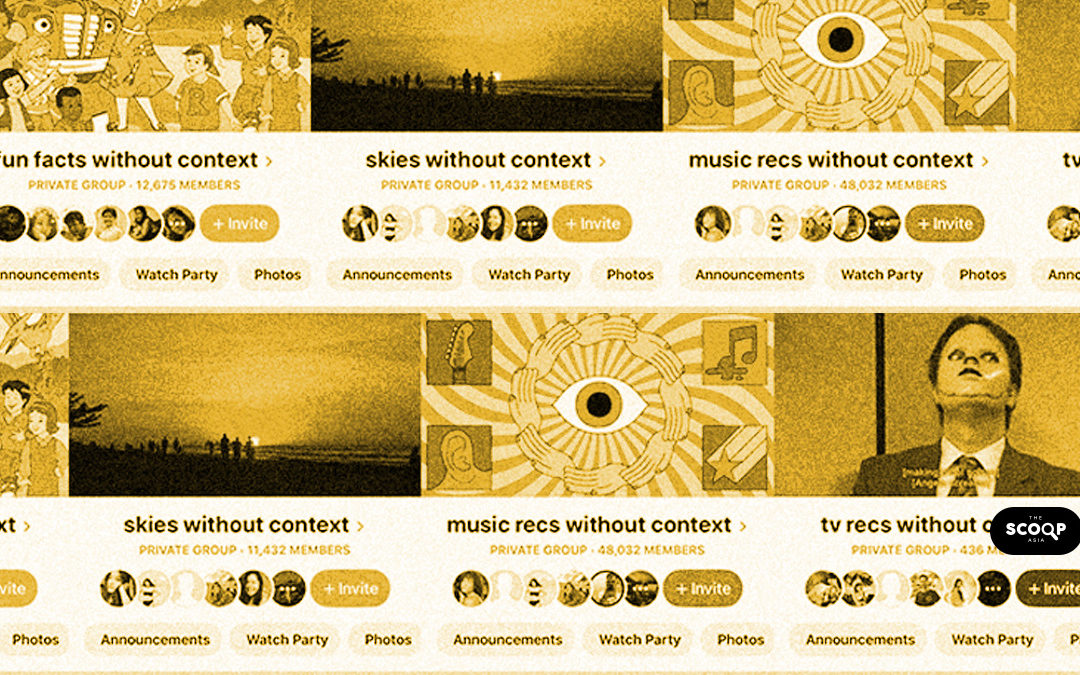 “Unlike Instagram,” types Mia Yatco, a group admin of travel pics without context, “using Facebook as the platform for such a group finds a more convenient way to engage with Facebook users…having the group feature makes Facebook ideal so that there isn’t just one user posting photos, rather a significant number of people are able to contribute.”

“MRWC (music recs without context) barely had 2,000 members at the start of the year,” Isabella Bernardo, the creator of music recs without context tells us. She started the Facebook group over 2 years ago on June 2018, apparently on a whim. “I love music and giving out recommendations to my friends, so two years ago I sent out a tweet at 2:00AM asking if people wanted to join the group…to be honest I never really expected it to blow up beyond a few hundred members, so it’s cool to see that people actually enjoy being a part of the community.”

It’s evident that the communities these groups created have grown to fill a need we’ve been missing in society – no judgment. Social media has influenced us to be ashamed or critical of people’s taste. All of a sudden, if you listen to this song, you’re not cool or you’re “basic”, if you read this type of author or connect to this “bad” genre, you’re not “in”.  Catherine Basallote of Lit recs without context puts it perfectly, “These groups can also be a safe space, when used correctly. It’s an avenue for expression…it’s nice sometimes to feel like you don’t have to explain anything to anyone but still being able to let out feelings.”

The importance of these safe spaces has grown to be even more important, especially in these uncertain times of quarantine. It is now, more than ever, that people turn to social media looking for positivity and human connections.

“This group aims to provide a wholesome and positive platform to allow people to get through these hard times. Even for us, it gives us a space to just breathe.” One of the admins of skies without context, Alex Roca, sends back in a message. “I was surprised by how much it affected people. I got private messages thanking me and the other admins for the ‘good vibes’ and the ‘wholesomeness’ that the group gives them.”

Lorenzo Delfin of travel pics without context feels the same way. He shares, “One of our motivations for developing the group was also to help deal with the lockdown. We had hoped that one way or another, we could do our part in sharing good vibes.”

At a time where our only connection to the outside world is through social media platforms like Facebook, it’s comforting and inspiring to know that there are spaces where we can bond over shared interests without the fear of being judged. A quick scroll through any of the groups have strangers from all over the Philippines commenting to recommend a similar book that the original poster may like, or a song that reminds them of a certain feeling, or even to compliment the picture a person took. Even now, somehow, in some way, our society is starting feel almost closer than ever.