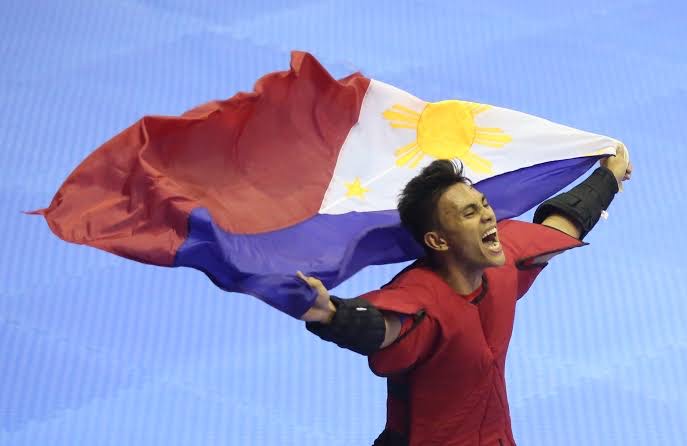 The Philippines has taken everyone by surprise at this year’s SEA Games because not only that the country made the opening ceremony extra, but its team has also taken the lead in the tally of medals, taking home fifty-five (55) medals in total; twenty-nine (29) gold, seventeen (17) silver, and nine (9) bronze. Only two days since the opening but the country has dominated the fields of dancesport, arnis, gymnastics, wushu, and sepak takraw.

Philippines took home a total of eleven (11) gold medals out of thirteen (13) events in dancesport. Tandems Michael Angelo Marquez and Stephanie Sabado; Mark Jayson Gayon and Mary Joy Renigen surprised the audience and bagged two (2) golds and one (1) silver respectively. While on the other hand, Pearl Marie Cañeda and Wilbert Aunzo has won three (3) gold medals out of their three (3) events — slow samba, rumba, and cha-cha. Partners Sean Mischa Aranar and Anna Leonilla Nuall have also dominated the tango, Viennese waltz and standard overall events gaining another three (3) gold medals for the country.

The Sepak Takraw of the Philippines did not fail to make the Filipinos proud as they brought home two (2) gold medals out of the two (2) events.

Fresh from his recent won in Worlds Artistic Gymnastics Championship, Carlos Yulos has again flipped his way to the top as he bags home the gold medal for the gymnastics’ individual artistic all-around men.

It has only been two days since the Sea Games 2019 started but the Philippine Team has been dominating the games since day one following to its leads are Vietnam and Indonesia. The games will officially end on the 11th of December.